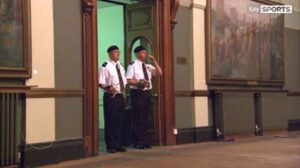 Monday December 15th saw the centenary of the inaugural meeting held at Fulham Town Hall, which was arranged to assist with the recruiting of footballers into the 17th Battalion Middlesex Regiment – more commonly known as the Footballers’ Battalion.

Special permission was granted by Hammersmith & Fulham Council for limited access to the town hall due to renovation work currently taking place.

During a night of high emotion and proud commemoration and reflection, a gathering of fifty or so supporters from Leyton Orient, Arsenal, Chelsea, Crystal Palace, Heart of Midlothian, Southend Utd and Tottenham Hotspur came together and were joined by Andy Dodd from the Football League and Peter Barnes representing the FA and former secretary of Orient Football Club. O’s legend and patron of the O’s Somme Memorial Fund Peter Kitchen, and Andrew Riddoch the author of When The Whistle Blows, joined Steve Jenkins in speaking about the footballers and the service and sacrifice they made.

Several poems were read followed by the laying of a wreath by Peter Barnes after which everyone joined in with the singing of some well-known songs of the trenches along with two Christmas Carols – Good King Wenceslas and Silent Night between which was read Richard McFadden’s letter.

Last Post and Reveille followed and it almost felt like December 1914 except numbers were far lower than they were one hundred years ago when the Grand Hall was packed to the rafters.

Ten Clapton Orient footballers joined up, along with the twenty five players and staff representing Arsenal, Bradford City, Chelsea, Croydon Common, Crystal Palace, Luton Town, Southend United, Tottenham and Watford, joined up to serve King and Country on that fateful day in 1914, with the O’s captain Fred ‘Spider’ Parker being the first up onto the stage to enlist.

The contribution and example made by the footballers who served in the 17th and also the 23rd Middlesex (2nd Footballers’ Battalion) went a long way to preserve the future of professional football in this country after the national game had received major criticism for continuing after war was declared.

We thank Hammersmith & Fulham Council for giving us the opportunity to mark this special anniversary of the meeting exactly one hundred years to the day, and look forward to hopefully returning when the hall is fully renovated.

The story of Clapton Orient’s major contribution to the Footballers’ Battalion in the Great War is told in They Took The Lead which is available from the Supporters Club and the club shop.