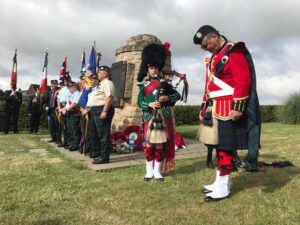 Steve Jenkins and Peter Kitchen, Chairman and Patron respectively of the O’s Somme Memorial Fund (OSMF), recently attended a very moving joint service of remembrance in association with the McCrae’s Battalion Trust, on 1st July in the villages of Contalmaison and Flers, on the Somme Battlefields in Northern France.

The joint commemoration was the first ever service held between the two organisations to pay tribute to the professional footballers, staff and officials of Clapton Orient in England and Heart of Midlothian and a number of other Scottish football clubs, to commemorate their service and sacrifice in the Great War.

The McCrae’s Battalion Trust, represents players and officials from Heart of Midlothian, Dunfermline, Falkirk, Hibernian, Raith Rovers and Partick Thistle, amongst others, who were the first professional footballers to enlist in WW1, under the charismatic Sir George McCrae, into the 16th Royal Scots in November 1914, followed just three weeks later by the formation of the 17th Bn Middlesex Regiment – later to be known as the ‘Footballers Battalion’, at a recruitment meeting at Fulham Town Hall in December 1914. At this meeting, 10 Clapton Orient players signed-up with a total of forty-one players, staff and officials from the O’s enlisting during the ensuing months.

The service was led by Padre to Heart of Midlothian, the Reverend Peter Sutton and the Mairie of Contalmaison, Joel Letemple and was attended by approx 200 people, amongst which there were a number of dignitaries, including the British Ambassador, The Provost Marshal of Edinburgh, the MEP for Edinburgh, Several High Ranking French and British Army officers, local dignitaries, visitors and residents of the communes of both Contalmaison and Flers.

Special songs telling the story of both sets of players, ‘Hearts of Glory’ written and performed live by Craig Herbertson at Contalmaison, whilst at the O’s memorial in Flers, ‘The Greater Game’ song about the O’s players, was played and there was also a poetry reading, ‘ The O’s in our Hearts’ written by Dutch O’s fan Alex Hup and his partner Katherine, with the Royal Scots band playing the bagpipes during a very moving wreath laying ceremony led by the British Ambassador.

At Flers, the Mairie Pierrick Capelle, welcomed the guests and visitors and then speeches were made by both Steve Jenkins, who is also Deputy Chairman of Leyton Orient Supporters’ Club and Club Legend, Peter Kitchen, both wearing the replica 1914 commemorative Red & White V shirts, who spoke about the O’s major contribution during the Great War and how the Memorial in Flers came to fruition. They also included a personal tribute to Lt Col Gary Tait OBE, the former Chairman of the McCrae’s Battalion Trust who helped make these ceremonies happen, but who sadly died one week before the event took place. Steve Jenkins, in his capacity as Bandmaster of the ’17th Pals’ Battalion Band’, also played ‘Last Post’ and ‘Reveille’ to end the ceremonies.

Afterwards, a banquet was held in Contalmaison, with a number of speeches, commemorating the event and several presentations were made, including an engraved glass plaque, presented by the OSMF to representatives of the McCrae’s Battalion Trust to mark this special occasion.

Both organisations spoke of the wonderful contribution made by both football clubs to the war effort and were very keen to see closer ties developed. It was suggested by Hearts Club Ambassador, former player and manager, Gary Locke, that a commemorative match or a pre-season friendly at the O’s, might be arranged between the two teams at an appropriate date in the near future, that would be a fitting tribute to the proud history, service and sacrifice of both clubs, along with all the footballers who served in the Great War.