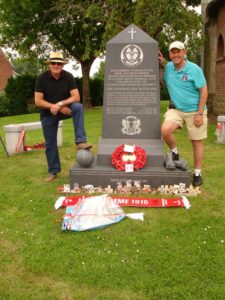 The O’s Somme Memorial Fund is proud to announce that Chairman Steve Jenkins and Patron Peter Kitchen will be involved in a joint commemoration service, which has been arranged in conjunction with representatives of the McCrae’s Battalion Trust, who are linked to the Heart of Midlothian Football Club. The service will take place on Monday 1st July in the villages of both Contalmaison and Flers on the Somme battlefields in Northern France.

This is the first such service arranged between the two organisations, when groups from both, along with the respective Mayors and local villagers, will come together to remember the service and sacrifice made by professional footballers from both Heart of Midlothian and other Scottish football clubs, as well as Clapton Orient FC, exactly 103 years after the start of the Battle of the Somme, the bloodiest day in the history of the British Army.

These footballers were the first Scottish and English professionals to enlist en masse into the army in 1914 at the outbreak of the Great War, with a large number of the Hearts team, along with its supporters and share-holders joining-up into the 16th Royal Scots, being the first to sign up following a call to arms by the charismatic Colonel Sir George McCrae, after whom the battalion was named. Players from Hibernian, Raith Rovers, Falkirk and Dunfermline were  also to enlist along with a large number of supporters.

Just three weeks later, the players, officials and supporters of Clapton Orient enlisted into the 17th Bn Middlesex Regiment at a special recruitment meeting to raise the Battalion, which was held at Fulham Town Hall in December 1914, in response to calls for English footballers to ‘Do their duty’, with the O’s captain Fred ‘Spider’ Parker being the first to sign for ‘King and Country.’ The 17th Middlesex was to be more commonly known as ‘The Footballers’ Battalion’.

Former O’s legend, Peter Kitchen who has been visiting the Somme battlefields annually since 1980 and Steve Jenkins, Deputy Chairman of Leyton Orient Supporters Club, who along with the playwright Michael Head,  co-produced ‘The Greater Game,’ a play that was based on Steve’s book ‘They Took The Lead,’ which tells the unique and true story of the O’s major contribution to the Footballers’ Battalion in the Great War. The play was staged at the Waterloo East Theatre, in London.

One of their guests at the play was Lt Col Gary Tait OBE, Chairman of the McCrae’s Battalion Trust who has seen active service in Iraq and Afghanistan. Gary was enthralled by the production and was also a guest weeks later at the O’s game versus Salford during the O’s very successful National League campaign. Gary became very keen to further develop the links between the two Clubs and their mutual Great War connections.

Steve Jenkins, who has also organised a number of visits to the battlefields of France and Belgium for O’s supporters along with Peter Kitchen, were founding members of the O’s Somme Memorial fund in 2009 and along with treasurer Malcolm McCarthy MBE, are justifiably proud of having already had a permanent memorial to the O’s heroes, erected and unveiled on the Somme battlefields in July 2011; The O’s Somme Memorial Fund is extremely pleased to be able to further develop closer ties between the two football clubs who have such a proud and noble history in the Great War, by bringing them together for this first ever joint commemoration and hope that it will be a fitting tribute to not only the ‘Pals of 1914’, but also to all the professional footballers who fought in WW1 .

The McCrae’s Battalion Memorial Cairn is in the village of Contalmaison, near Albert in Northern France, in the heart of the Somme battlefields, and the commemoration service will start there at 09:00am on Monday 1st July, before moving onto the village of Flers, approx 3 miles away, where the O’s Memorial proudly stands and where a commemorative service will be held, starting at approximately 10:30 am.