William Jonas – Lest We Forget 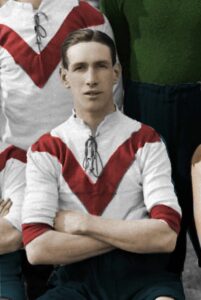 …’Best of luck, special love to my sweetheart Mary Jane and best regards to the lads at Orient’

Today we remember Clapton Orient striker William Jonas, who was killed in Delville Wood on the Somme, France, on July 27th, 1916.

Jonas joined the 17th Battalion Middlesex Regiment, along with nine of his Clapton Orient team-mates at the specially convened recruitment meeting at Fulham Town Hall on December 15th, 1914. During the ensuing months over forty Orient players, staff and supporters were to join-up into the 17th Middlesex which was to become commonly known as ‘The Footballers Battalion’.

The ever-popular Jonas, whilst being an excellent centre-forward, could also play in many other positions including goal-keeper, in fact he played in every position except outside-left, but it was his role as a striker that lead him to really make his mark at the O’s, pairing up so well with his former schoolboy pal and goal-ace Richard McFadden. Between them they terrorised the opposition and helped the Orient make a mark for itself in the second division as the club pushed for promotion prior to the outbreak of war.

Born in Blyth, Northumberland, in 1890, it was recorded that when he joined the Orient, he was 5’8” tall and weighed 11st 4lb. His initial career, like so many others in the area he grew up in, was in coal mining, working at Cambois Colliery.

His football career started at Jarrow Croft FC before joining Havannah Rovers having turned down a move to Barnsley. Jonas signed for Clapton Orient in 1912 after his best friend Richard McFadden has arranged a trial for him at the O’s.

His good looks and dashing style of play lead him to become very popular with the female admirers at Millfields Road, so much so that at one stage he was receiving over fifty letters a week from the ladies of Homerton. Whilst very flattered, he felt he needed to make a statement in the Orient matchday programme to the effect that whilst he appreciated the attention, kind words and good wishes could they please cease as he is very happily married to his sweet-heart Mary Jane!

It was during the Battle of the Somme in the summer of 1916 that Jonas, along with the rest of his O’s team-mates found themselves in the heat of battle. Some of the heaviest and bloodiest fighting was in Delville Wood and it was here that William Jonas and Richard McFadden found themselves pinned down under heavy fire and shelling. It was during this fighting that Jonas gave up his life.

‘I, Richard McFadden sadly report the death of my friend and O’s colleague William Jonas on the morning of Thursday July 27th, aged 26.

‘Both Willie and I were trapped in a trench near to the front in Somme, France.

‘Willie turned to me and said “Goodbye Mac”, ‘Best of luck, special love to my sweetheart Mary Jane and best regards to the lads at Orient’. Before I could reply to him, he was up and over. No sooner had he jumped up out of the trench, my best friend of nearly twenty years was killed before my eyes. Words cannot express my feelings at this time.

William Jonas’s body could not be retrieved and was lost to the elements – consequently he is commemorated on the Thiepval Memorial to the Missing of the Somme.